Patti is a member of a group of terrific girls who get together to make something new each month. They have done this for many years have built a wonderful circle of friendship. They chose the Mosaic Stepping Stone Workshop at From the Summer's Garden for this month's activity. Lots of fun and lots of laughs!
Your group can join on the fun this spring. Our newest Creative Workshops are now online and ready for enrollment. Info: fromthesummersgarden.com


Announcing our Spring Sale at From the Summer's Garden 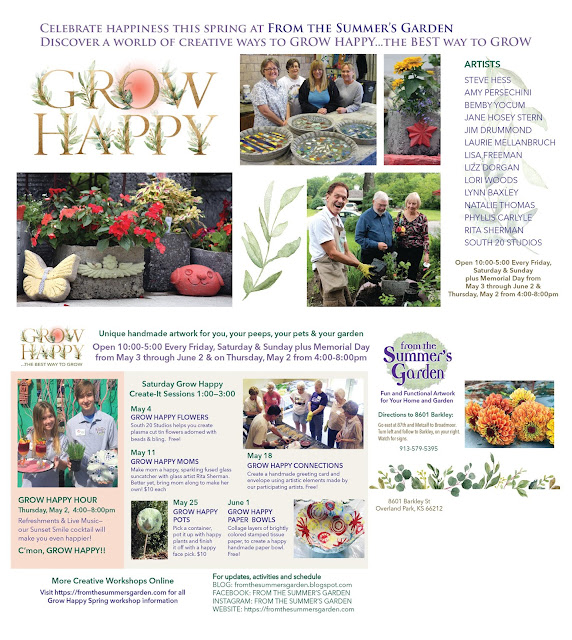 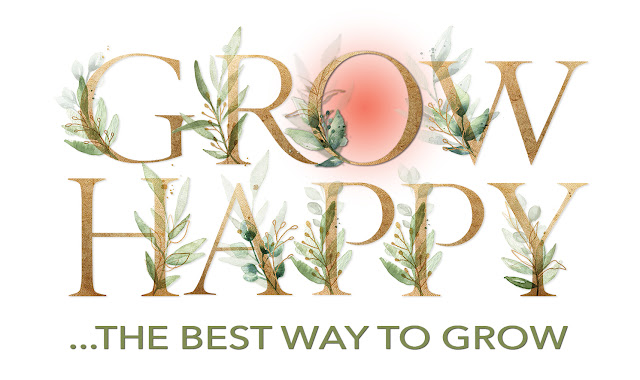 GROW HAPPY...be here now
The phrase "be here, now" comes from a book by that title, written by a New Age philosopher named Ram Dass. It has become a popular catchphrase (especially in yoga classes, for example) to mean "be present, stay in the moment, focus, pay attention to the person you're with and your surroundings".
It's also a nod to the mindfulness movement where you are fully mindful of your surroundings, and "present" in them. "Be happy in the moment" and you will continue to be happy as you are mindful of the present. It also speaks to the idea that if one is not busy regretting the past or worrying about the future, one is "living in the moment" and can be happy.
Posted by Steve at 4:42 PM No comments:

DON'T WAIT FOR SOMEONE TO GIVE YOU FLOWERS 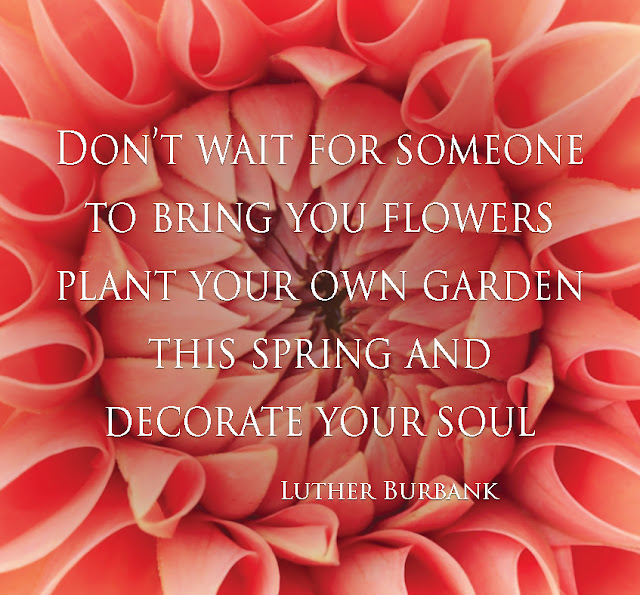 BENEFITS OF HYPERTUFA CONTAINERS AND DECORATION

BENEFITS OF HYPERTUFA PLANTERS AND DECORATION 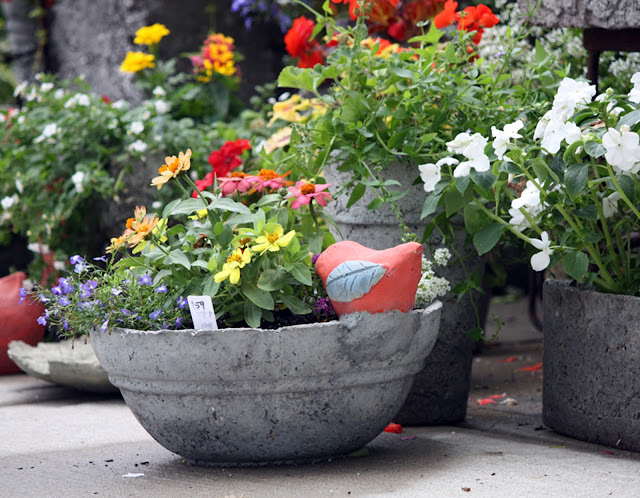 Hypertufa is by far one of the most attractive and appealing decorations you can ever add to your garden. It looks beautiful and has so many benefits! You just need to make sure you use the right recipe and the look and functionality of your garden will increase with your own creativity. Hypertufa, how do I love thee? Let me count the ways… 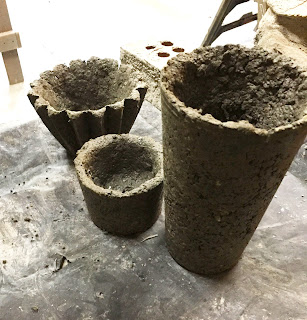 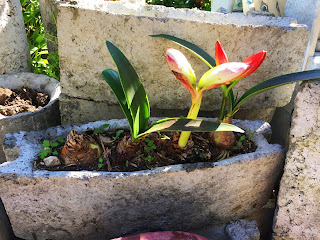 Unique Look of Aged Stone
Hypertufa has a unique look of ancient stone. Each container made from hypertufa is unique even if you make repeated casts it from the same mold. This is because of the character of the mixture you mix and the difference wrought by your hands each time you sculpt them. 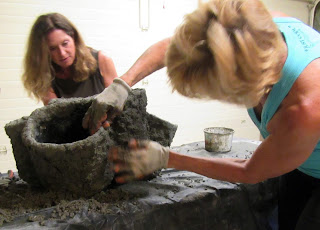 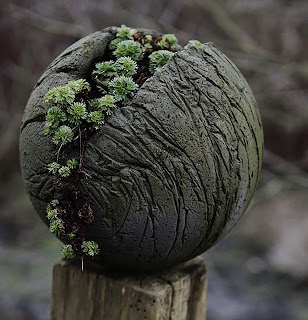 Lightweight and Breathable
Because of the lighter weight aggregates used in Hypertufa, they are much lighter in weight than pots of the same size made of cement. Furthermore, Hypertufa containers breathe and can be left out year round. They do not break apart with the freeze/thaw of Midwest winters. 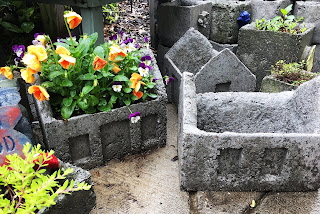 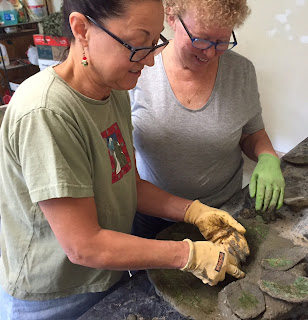 Endless Opportunities for Creativity
Because of the versatility of Hypertufa as a sculpting or molding medium, you can make almost anything you want either free-hand or molded and you can decorate its surface in whatever way you like. You can make it crude or make it refined, make it smooth, press textures into it even make it smooth or stick anything into it. 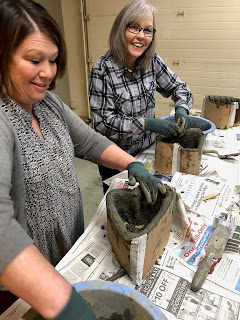 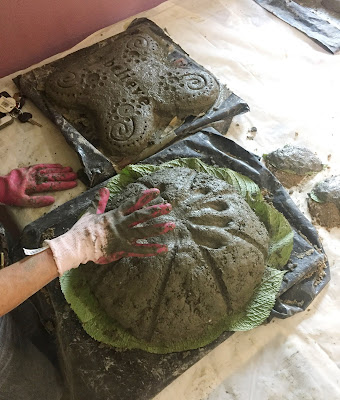 Durability/Forgiving
Well-made hypertufa pots will last for years. They will withstand chilling temperatures and take on a wonderful mossy green patina through the years. You can bump it or nick it with the edge of the lawn mower and it will not look worse for the wear. If something should cause part of your planter to crack or break, you can easily mix up a small batch of hypertufa and repair it so you can’t even tell it had broken.
Posted by Steve at 11:30 AM No comments:

JACK AND THE BEANSTALK- A Gardening Activity Story 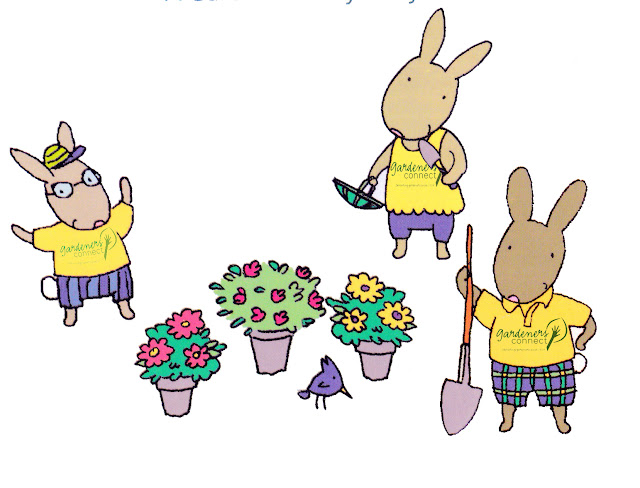 Once upon a time, there was a boy named Jack.  His mom and dad were master gardeners with green thumbs thanks to a magic watering can. They even had their own gardening show on TV and were quite famous.  One night a greedy giant destroyed their entire garden and ran off with the magic watering can, just like that!

Now, they were very poor.  They had to sell tomatoes at the farmers market.  One morning, Jack’s mom asked him to take the last of the tomatoes to the market and sell them.  On the way, he met a strange man who offered him magic bean seeds that would bring good luck.  Jack thought this was a great idea and traded the last of the tomatoes for the seeds. But when Jack’s dad saw the beans he was very angry and threw them into the garden. 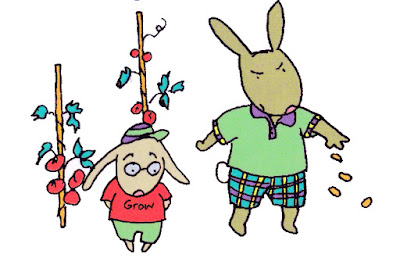 The next morning, Jack looked out of his window. There in place of the magic beans stood a giant beanstalk.  It was really awesome and Jack could not resist.  Up he climbed into the sky, through the clouds and found himself in a beautiful garden. 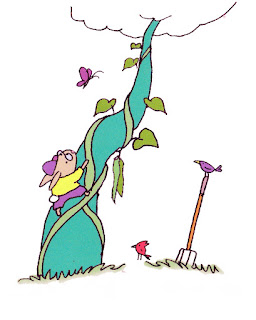 All at once a loud voice boomed, “Fee, fie, foe, fun. I smell a master gardener’s son! Jack quickly hid inside a garden shed. 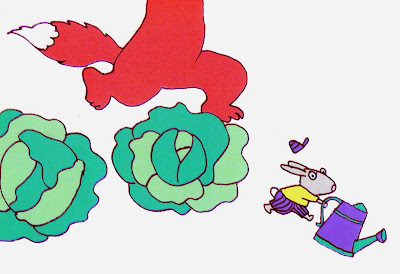 The giant tore after him shouting, “Fee, fie, foe, fun. I’ll get you, you master gardener’s son!” 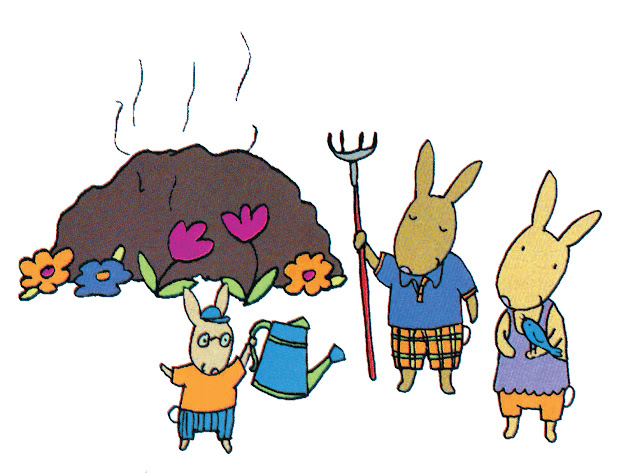 With the help of the magic watering can, Jack and his parents could once again grow a beautiful garden.  Together they hosted a new garden show on TV and lived happily ever after.

This story was just for fun but you can plant your own giant beanstalk.  It is done by planting two different types of bean seeds together.  Castor Bean and Hyacinth Bean Vine, which can be found at most garden stores or online.  The Castor Bean grows high and tall with big leaves and the Hyacinth Bean Vine grows up around it with beautiful flowers and colorful bean pods.  Be sure to watch out for giants and have a great time in the garden!

FROM THE SUMMER'S GARDEN PRODUCT LISTING 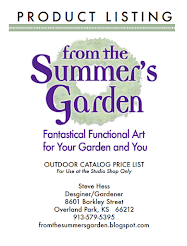 HANDMADE PAPER STUDIOS- See What We do!

HYPERTUFA STUDIOS-SEE WHAT WE DO!

Here's how to get to From the Summer's Garden in Overland Park, KS. 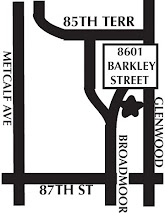 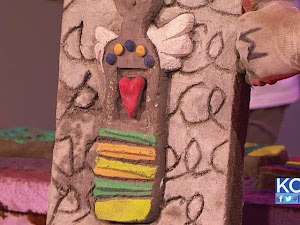 This link takes you to my Work Samples program and product portfolio from Hallmark and Mitchell Imports. It is a focus on my planning/concept skills as well as art and creative direction.

This link takes you to my Visual Portfolio which explores my own original artwork.
http://stevehesspaticons.blogspot.com/

TAKE A LOOK AT OUR BOARDS!